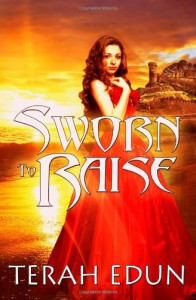 The idea behind Sworn to Raise was appealing – after all, who doesn’t like a modified Cinderella story? Unfortunately, it was slow to start and I couldn’t connect with any of the characters. The story certainly started to pick up once Ciardis began learning about magic, however it was around that same point that the story became a bit of a mess. Sworn to Raise is the first in a series, so it’s difficult to understand why all of the action had to be rushed into in the last 50 pages; it ended so quickly that, despite the fact that I read it only a few days ago, I can honestly say that I don’t remember much of what happened.

As I was reading, I couldn’t help but feel as though the supporting characters were merely there to further the plot, since they had no real substance and their back stories were not elaborated upon. For example, it is mentioned on several occasions that Ciardis’ sponsor has an ongoing rivalry with another sponsor, although we are never told how that came to be. It seemed as though Edun was only telling readers what they needed to know in relation to Ciardis; if it doesn’t help her become a proper Companion, it isn’t important.

I found the Companion’s Guild to be interesting: Companions are trained so that they can attract a Patron, who assesses whether or not their magical qualities can be useful to them before making their selection. The training process was not described in depth, which is a shame – it would have been interesting to learn more about the culture, and would have provided much-needed character development.

Overall, Sworn to Raise was not a book I enjoyed reading, and it certainly didn’t live up to the comparison to Kristin Cashore’s Graceling series. Maybe the sequel will be better.

This review can also be found at The In-Between Place. I received a copy of this book from Netgalley in exchange for an honest review.
Tweet
1400 BOOKS
TwitterGoodreadsBook Blog