Blue is for Nightmares (Stolarz Series) 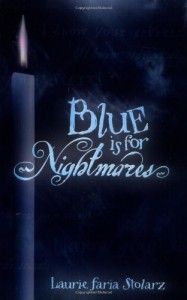 I first read Blue is for Nightmares shortly after it was published. I was in middle school at the time, and I remember really enjoying the entire series - including the graphic novel that everyone seemed to dislike. Apparently reading tastes can drastically change in ten years, as this book quickly taught me.

Blue is for Nightmares is like one of those 80s slasher films: more suspense than substance. The story itself kept my attention well enough, but Stolarz’s desire to create a creepy, mystery-filled plot caused equally important things, like character development, to fall by the wayside.

I didn’t really care much what happened to the characters because they didn’t feel real; they were flat, undeveloped, and most were rather unlikable. Stacey herself was interesting only because of her nightmares and spells. Drea, her roommate, was the bitchy, popular girl who felt entitled to everything (and everyone). She was so selfish and petty that there were moments when I found myself wondering why Stacey would bother working so hard to save her, let alone consider her a best friend. Amber and P.J. seemed only to be there for comic relief, and there were times when even that was cringe-worthy. Stacey’s love interest, Chad, was completely forgettable, and her interest in him seemed superficial at best.

The witchcraft itself was really interesting to read about. Stacey’s brand of magic used items that you would have around at home: candles, potatoes, playing cards. They’re something that you could easily do at home given the amount of detail that they were described in, and are used for clarity and emotional strength as opposed to the Harry Potter spells that come to mind at the sight of the word “magic.” These spells don’t always work, but that adds to the realistic nature of the story.

Stacey’s nightmares were probably my favourite part of the story (as bad as that may sound). They provided just the right level of tension, which made up for the fact that the identity of the stalker wasn’t much of a mystery. It was neat to see how these nightmares unfolded during her waking hours, though the many references to Stacey’s bed wetting were a bit overdone; while it did factor into the big reveal in an unexpected way, there were only so many times I could read about it.

Overall, Blue is for Nightmares was a disappointing reread. I’m not sure if I’ve become a more critical reader as I’ve aged or what, but it definitely wasn’t as enjoyable as I remembered.

This review can also be found at The In-Between Place.
Tweet
1400 BOOKS
TwitterGoodreadsBook Blog